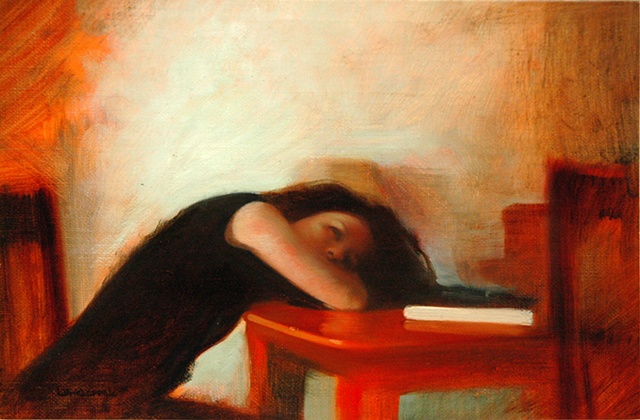 Amber Lia-Kloppel was born in Ithaca, New York and she studied art as a young adult at the Community School of Music and Arts. She did her undergraduate study in Philadelphia at Moore College of Art and Design, receiving a BFA, and subsequently moved to New York City where she received her MFA from the New York Academy of Art. Amber has been awarded the Elizabeth Greenshields Foundation Grant, the Constance Saltonstall Foundation Grant, and the Stobart Foundation Grant for her work. During graduate school she was awarded a Prince of Wales/Forbes Foundation Travel Grant and Residency, and during undergraduate school she received the Emily Sartain Fellowship for European Travel. She has studied with renowned figurative artists and teachers including Steven Assael, Moe Brooker, Patrick Connors, Will Cotton, Vincent Desiderio, Tina Newberry, Ted Schmidt, Wade Schuman, and Steve Sherman, among others.

She paints mostly figurative compositions and portraits, and her work is grounded in American and Dutch traditions of genre painting. Her major influences range from Johannes Vermeer to Edward Hopper to Alice Neel, and while there is a tendency towards voyeurism in her work, it is countered by an element of confrontation.

Amber’s work has been shown primarily in New York, Philadelphia, and San Juan, Puerto Rico, and it is part of numerous private collections including HRH the Prince of Wales, and the Emmy Award winning actor Martin Short. Her work is included in the permanent collections of the Palmer Museum of Art, and in the CIGNA Museum and Art Collection. Amber currently lives and works in Ithaca, NY.