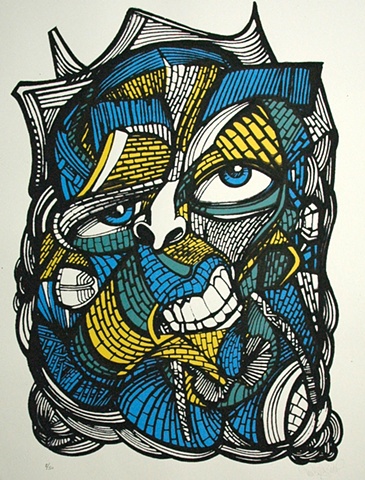 David received his diploma from the Central High School of Visual Arts in Santurce, PR where he studied drawing, painting, etching, sculpture, and xylography and began his interest in urban art. Later, he continued studying at the School of Visual Arts in Old San Juan, PR, where he specialized in drawing the human figure, portrait and figurative art. He also studied editorial illustration, xylography, engraving and graphic design. After finishing his studies, he dedicated himself to incorporating the various techniques of classic art into urban art, specializing in murals. He has also worked doing editorial illustrations for magazines, newspapers, children’s publications, book covers, etc. David is a member of the artist collective CORO, which is comprised of graphic designers, illustrators and visual artists. The CORO has successfully exhibited in Puerto Rico, Tokyo, Paris and New York. In addition to his collaborative works, David has held many solo exhibits. He also curated the Espacio Disponible show for the Caribbean University in Bayamón, PR.