History of the Building

Construction of the San Juan Municipal Theater, one of the oldest in the Western Hemisphere and among the richest in cultural tradition and achievements, was begun in 1824 under the Spanish governorship of Don Miguel de la Torre, Count of Torrepando, and its design and construction are attributed to Don José Navarro y Herrera, Commander of Engineers.

Built of heavy adobe masonry and tamped rubble, with wood beams and timber trusses supporting a tin-clad gabled roof, and louvered windows and turned-wood stair and balcony railings, it was done in the prevailing primitive colonial style of the period reminiscent of the Tuscan neoclassical, and was probably inspired on La Scala de Milán.

It was a rather austere building, lacking in facilities and with unfinished exteriors except for its main façade, which was rich in neo-classical detail and which fortunately was but slightly altered during subsequent renovations, and its interior of which the outstanding feature was the excellent ceiling frescoes and painted proscenium decorations by Jenaro Pérez Villamil, reputedly a gifted apprentice of Goya.

In 1879, after suffering extensive damage from earthquakes and hurricanes, its first reconstruction was entrusted to Tulio Larrinaga, a brilliant Puerto Rican engineer versed in the design of cast iron and steel structures who gutted-out the interior and rebuilt it in the style of “La Belle Epoque”, with paired cast iron columns supporting the balconies, wrought iron lattice railings, and with iron staircases.

The structure remained basically unchanged until 1946 when, after several years of disuse, Architect Jorge Juliá Passarell undertook its renovation. At that time neither the community nor the authorities recognized the character and value of the architecture of the San Juan Historic Zone, and the design program called for a reconstruction with the interiors done in the “Art-Deco” style of the war time years. However debatable, it nonetheless provided an extended lease on life for the venerable structure which had already been scheduled for total demolition and whose utility had since been supplanted by the theater at the University of Puerto Rico.

A fly-loft, rigging, stage lighting and sound equipment, and an air conditioning system were installed for the first time in the theater. These systems were still in use, although obsolete and in need of extensive and costly repairs, until January of 1974 when the house was finally closed for restoration.

After two years of intensive design and construction, and at a cost of approximately two million dollars; the San Juan Municipal Theater reopened its doors to the community on December 28, 1976.

The design program called for the historical restoration of the existing structure and the installation of specialized theatrical equipment and electrical and mechanical systems in accordance with the latest advancements in the state of the art.

The design process involved extensive and analysis, and evaluation thereof, whereby the resulting project would represent an equilibrium between acceptable standards of historical authenticity and the demands of an intensely varied repertory theater-auditorium requiring complete changes of lighting, sound, and scenery plans on a weekly basis. Thus, data obtained through historical investigation was constantly being weighed against the possible options of an architecturally correct solution.

It was not the intention of the Architects nor of the Client to restore the building in all faithfulness to its original plan and stylistic detail, but rather to enhance and preserve its character while enabling it to function as an active, living organism capable of generating tremendous cultural activity in the community.

3. Rigging System: A 45-set counterweighted tee-track system with 2:1 reduction permitting operation from a fly gallery above the stage and with capabilities for reflecting stage panels, and an ample number of stage sets and backdrops.

4. Air Conditioning System: Separate systems permitting use only as required at the principal areas, such as house, offices, ticket booth, etc., and with a separate system for the stage to be used during rehearsals.

5. Electrical System: An independent electrical substation with capacity for all foreseen electrical loads, and an emergency battery system ensuring safe illumination of all areas in the event of power failures.

6. Fire Protection System: Increased number of fire exists, fire hoses, and the installation of an asbestos fire curtain at the proscenium which can be released manually, or automatically with heat-sensitive fusible links.

1. Construction of the west arcade where the sidewalk café is located with the lounge on the floor above. The foundations for this structure, which balances a similar one at the apposite side of the building, were laid by the original builders but construction was never completed.

2. Construction of a basement backstage where the workshop, storage areas, kitchen, and other services are located.

3. Relocation of the main staircases from the main lobby where they had been rebuilt during de renovation of 1949 to their original location in the lateral galleries, permitting the restoration of the wall openings of the front elevation and adjacent corners. The stairs now inter-connect all three levels of the theater.

4. Construction of the house ceiling in neo-classical style with a crystal chandelier as its focal point, and with contemporary stage lighting, sound and air conditioning equipment integrated in the design.

5. Restoration of the proscenium boxes which had been sealed for use as mechanical equipment ducts.

6. Restoration and completion of the building exterior, with a mansard screen commencing at the point of the original parapet elevation and extending over the fly-loft and other concrete structures added subsequently.

7. Reorganization of the interior spaces within the limitations imposed by the existing structure.

8. Installation of theater seating which was specially designed and fabricated with ornamental cast iron standards in order to preserve the integrity of period design.

9. Acoustics – The intended use of the building encompasses the entire range of the theatrical and musical arts as well as lectures and other assemblies of a civic nature. In planning the acoustical response of the house, and in the selection of materials, it was determined that optimum reflection from the ceiling and dispersion from the walls would ensure uniformity of sound distribution throughout the house, but that carpeted floors and upholstered seats would also be required in order to avoid excessive reverberation time and fluctuations in response between a full and an empty house. The house, as planned, is crisp with a medium-to-low reverberation time with permits clarity of the spoken voice without detracting from the brilliance and natural sonority of musical instruments. At present, during musical performances some of the sound is lost in the permanently flown rigging over the stage. However, once the sound reflecting stage panels, which were deleted from the original contract for financial reasons, are installed, this condition should be entirely corrected. 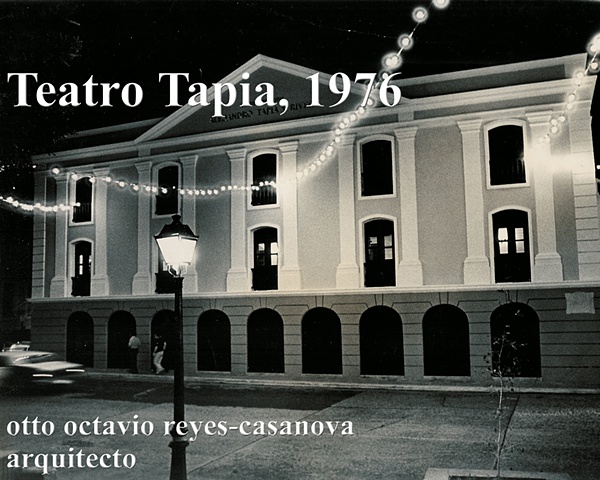 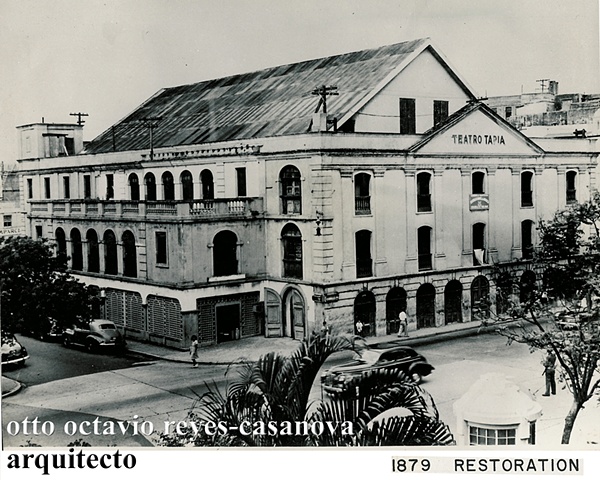 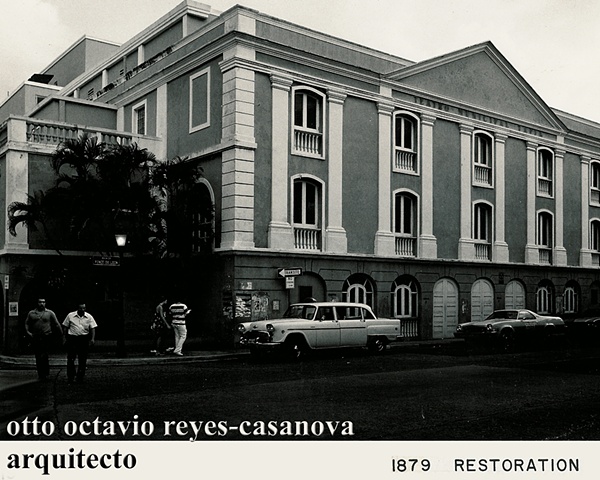 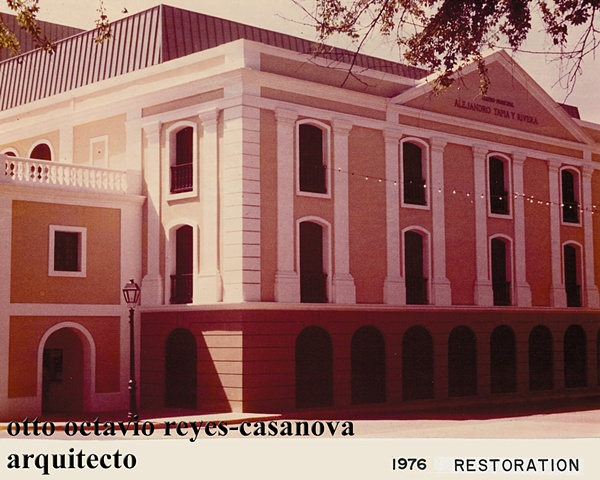 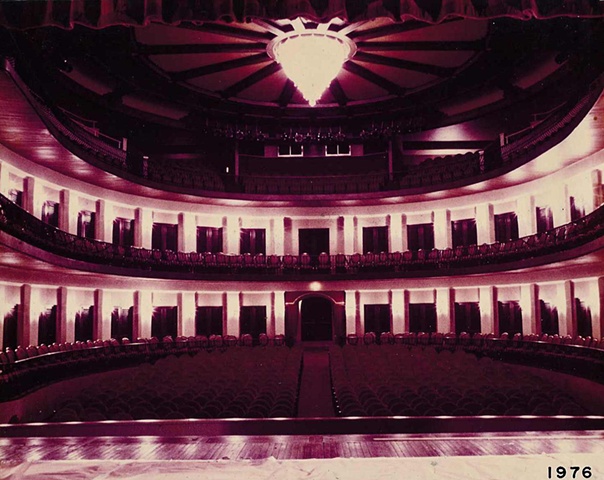 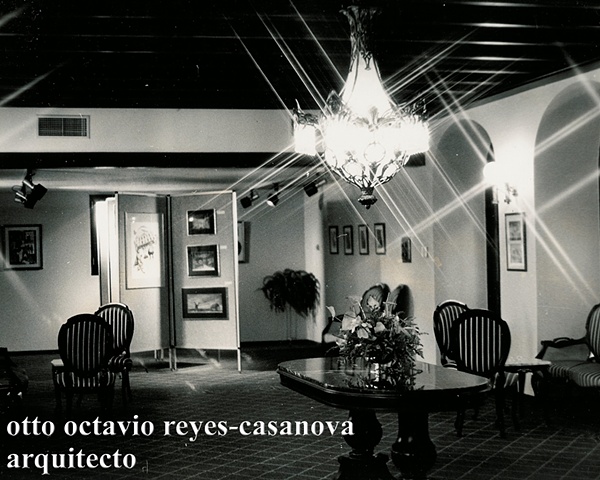