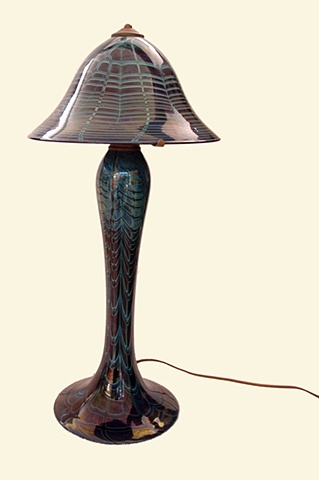 The art of David Hartman, whether it is presentational, functional, or pure beauty, has been widely accepted since his youth. David's work is perfect in the fashion and decorating world but his ideas in glass art still have not been completed. The appeal of the artist's work is his alchemy: this is what separates him from other glass artists. He has combined the qualities of the Old World with the design of the new century, which explains the twenty-year success of his Swallowtail Glass Studio.

Among the names on David's clientele list have been Neiman Marcus, Contemporary Art Glass of New York, Rax of Amsterdam, and Rare Discovery of Hawaii.

David has had the honor of being invited to exhibit his work internationally. His art was included in the Tiffany Glass Exhibit, De Young Museum in San Francisco. While participating in a glass show in Amsterdam, David was able to spend six weeks touring France to demonstrate and instruct his method of the art of blowing glass.