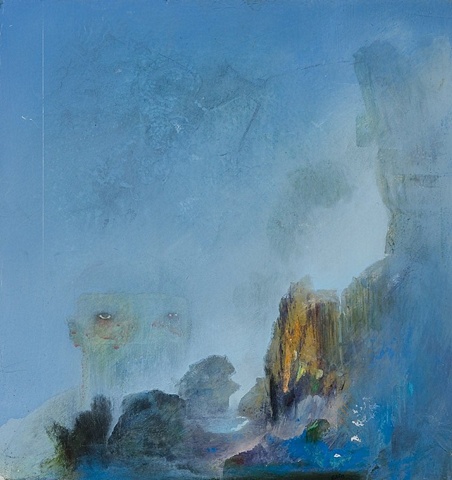 Born in Puerto Rico in 1971, and raised in seven east coast US cities that shortly followed, Edgar Sanchez Cumbas developed keen observation skills needed to adapt to constantly changing surroundings. The most impactful memories he pulls from spawn from the cultural and visual transition from the South Bronx to the central Florida region as a young teen. Continuous exposure to new environments and cross-cultural experiences over three decades presses Cumbas to explore his own inner landscape and plumb it for the rich narratives he employs during his artistic career.

His paintings have been collected throughout the United States and abroad over 20 years, and most recently seventeen paintings were acquired for a private collection in the North Kowloon Magistracy of Hong Kong. Those who are familiar with Cumbas' work have come to recognize his unique mark no matter the style or story he leads us through as his work progresses.

Since 2009, Cumbas has been exploring contemporary abstract expressionist themes whereby returning to the fundamentals of purist painting. With a strong desire to research and develop his voice within the work he began pursuing a Master of Fine Arts degree at the Massachusetts College of Art and Design in Provincetown, Cape Cod.

The exploration of identity has driven the underlying content of his work and how our differences in perspective directly relate to our own interpretation of our environment as living beings. Edgar is looking forward to working from studios in both Cape Cod and Tampa Bay and experiencing how these opposing coastal environments will influence his paintings.